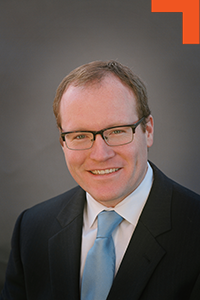 Patrick began his career as a prosecutor after being hired by Lou Bianchi in 2007 as an assistant state’s attorney. He worked his way from traffic court to special prosecutions, and in 2016 Patrick was named McHenry County First Assistant State’s Attorney. Patrick has tried over 90 cases at all levels of the justice system. As a domestic violence prosecutor, Patrick changed the way that domestic violence cases were prosecuted by trying and winning cases even when fearful victims would not appear in court. For his efforts, Patrick earned Turning Point’s Peace and Justice Award.

Patrick earned his law degree from Washington University School of Law in 2005 and a master’s degree in environmental law from the University of Vermont. Prior to law school, Patrick earned his bachelor’s degree in biology and liberal arts from the College of the Holy Cross. At Holy Cross, Patrick was a member of the All-Time Patriot League Academic Honor Roll. He is admitted to the Illinois Bar and United States District Court for the Northern District of Illinois, and is a member of the Illinois and McHenry County Bar Associations.

A devoted family man, Patrick is the proud husband to Colleen. They live in Crystal Lake with their three sons, Patrick R, John, and James. They are members of St. Thomas Church in Crystal Lake. Patrick is also a member of the Knights of Columbus.