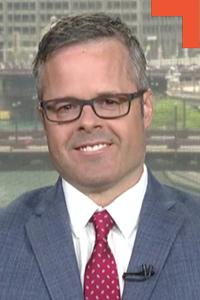 Michael Koolidge hosts the regionally syndicated radio program The Michael Koolidge Show (Koolidge.com), heard on 14 radio signals throughout Illinois and Michigan. Mike is a former U.S. Army captain who served in the very beginning of Operation Iraqi Freedom and has been broadcasting on AM & FM radio stations daily for over 10 years from a Non-Big City/Rural/Small Town America perspective. The show broadcasts from the road frequently (both GOP & Dem National political conventions every cycle since 2008, CPAC every year since 2010, various AEI events both in D.C. and elsewhere, MLB Spring Training, etc.), has interviewed thousands of newsmakers, journalists and entertainers, hundreds of politicians, three Oscar winners and one President of the United States (the current one, twice). Mike is also Second City Training Center alum and outside of his radio show continues to write, produce and host comedic and musical stage shows that come from a Right-Of-Center perspective.