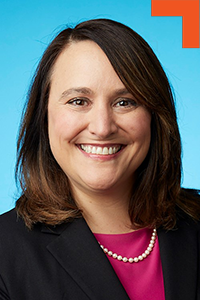 After law school, Laura worked for Illinois Attorney General Jim Ryan in policy and program development and went on to represent more than 1,000 insurance companies as senior counsel and regional government affairs manager at a major insurance trade association. She then spent a decade with one of the world’s premier law firms working in business development. She directly supported the global insurance and financial services practice and led a team of four business development professionals in Chicago and Washington, D.C. Laura joined Governor Rauner’s Administration in January 2016 serving as Chief of Staff for two state agencies. In April 2019, she joined a major Chicago law firm as Chief of Staff to the Chair of the firm.

Laura serves on the board of The Lincoln Series and the Chicago Lawyers Chapter of the Federalist Society for Law and Public Policy. She is active with the Republican National Lawyers Association volunteering for election day ballot integrity projects and has served as a hearing officer for the Chicago Board of Elections. She is a former leader of the Chicago Young Republicans which received multiple national awards during her tenure.