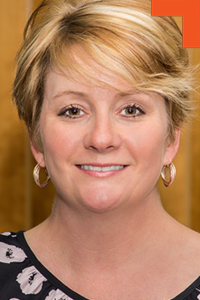 Kristy served as Downstate Director for the Office of the Illinois Comptroller, representing Comptroller Leslie Geissler Munger in the southern region of the State of Illinois. She has served as the Treasurer of the City of Metropolis since 2004 and is an appointee to the Massac Metropolis Port District. Prior to her current position, she served as counsel for the Illinois Development Finance Authority from 1998 – 2003, and as an assistant attorney general from 1997 – 1998.

Kristy is active in community service, serving as vice chairman of the Massac County Community Mental Health Board and Tri-chair for the Shawnee Alliance for economic and community development. She is also active in the Metropolis Kiwanis and Chamber of Commerce.

Kristy and her husband Barry live in Metropolis with their two sons. They enjoy traveling, golf, and supporting their kids in numerous sporting activities. The family are active members of the First United Methodist Church