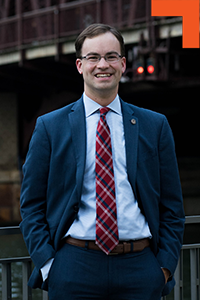 David’s deep commitment to public service began at an early age. He was first elected by his peers to serve as Student Body President at the University of Illinois at Urbana-Champaign. After graduation, David became the youngest person elected to the Downers Grove Village Council in 2013, where he was later selected as Mayor Pro Tem. His leadership focused on listening to residents and giving them a voice in major community decisions.

In July 2016, David was named State Representative for Illinois’ 81st District to fill an unexpired term and was subsequently elected to a full term in November 2016. His service in the state legislature focused on finding bipartisan solutions to make government more efficient, effective, and responsive to the people of Illinois. During his term, David was one of the most productive legislators in the House of Representatives, serving as chief sponsor of 15 bills that became law.

After leaving the legislature in January 2019, David joined the Alzheimer’s Association Illinois Chapter as Director of State Affairs, where he advocates for policies to improve the lives of nearly one million Illinois affected by Alzheimer’s disease.

David also serves as Vice President of the Board of Directors for the District 58 Education Foundation, which supports teachers and students in local elementary schools. He belongs to Friendship United Methodist Church of Bolingbrook where he has served as co-leader of the eighth-grade confirmation class, committee chairman for affiliated Boy Scout Troop 35, and a member of the chancel choir and bell choir.