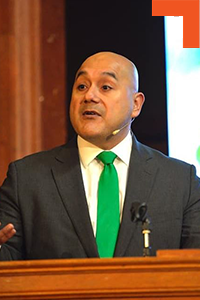 Angel Garcia received his law degree from the John Marshall Law School, and his MBA from the Brennan School of Business. Angel began his career at the Chicago Mercantile Exchange, where he worked on the trading floor and later in the Market Regulation department.

Today, he runs his own law and consulting firm. As an attorney, he counsels his clients on criminal and civil matters. In addition to his work in law, Angel has been active in politics, working on various campaigns including local, U.S. Senate, gubernatorial campaigns. Angel has been instrumental in building GOP and Liberty minded organizations including the Chicago Young Republicans, the Republican National Hispanic Assembly and the John Marshall Law School Federalist Society. Angel has been a political commentator on various networks including Telemundo and Univision.

Angel currently serves the residents of Illinois as a statewide commissioner, for the Illinois Latino Family Commission. Angel grew up in Chicago, in the South Chicago neighborhood and currently lives in the neighborhood of McKinley Park.